Volunteer of the Month: Judy Firestien

Much of our work would not be possible without volunteer power! This month we are honoring Judy Firestien, one of our Heritage Culturalist Volunteers, who currently volunteers her time at PHA Board Meetings taking minutes while also promoting the CALA to the community through the Von Trotha Firestien Farm at Bracewell.  Thanks for all of your time and energy, Judy.

Question: Tell us about your career path and your work on the Farm.

Answer: I worked for several small biotech companies in Fort Collins as Office Manager for about 12 years before moving back to the family farm northwest of Greeley in 2005.  I had begun to gather genealogy and historic information on our farm and the settlement of Bracewell where the farm is located.  In 2008, I compiled much of this information into a nomination for the farm and in 2009, our farm, Von Trotha-Firestien Farm at Bracewell, was listed on the National Register of Historic Places.  Since then, we have hosted educational groups and are continuing to work on “hands-on” activities to educate the public on the importance of agriculture and irrigated farmland in this area.  For several years we have had an “Open Farm” event with antique tractor displays, petting zoo, pony rides, irrigation demonstration, and educational displays to encourage people to come out and experience the farm.  We also regularly host gatherings such as graduation parties and birthday parties at the farm and have also hosted a couple of weddings.

Q: What do you like most about the Cache la Poudre River National Heritage Area?

A: I really enjoy the great history it holds with regard to agriculture and water law and the development of the Greeley-Fort Collins area.  It is also so special to me because a portion of our farm lies within the Heritage Area and I have many fond childhood memories of times along the river, mostly exploring with my dog, Duke.  We also had an ice skating pond on our property next to the river and spending time skating and having skating parties are some of my very favorite memories. 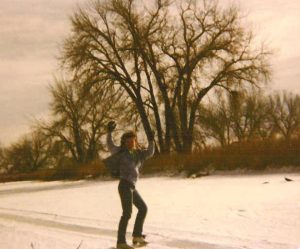 Q: Why did you become a volunteer with the Poudre Heritage Alliance?

A: I wanted to further solidify the knowledge I have gained over the past years with regard to history of the area, water history and water law, and historic preservation.  I hope to further use this knowledge on our farm to educate the public on history, water, and how awesome the PHA is and to inspire and encourage them to learn more!  (You can learn more about Judy’s farm and its history within the CALA at www.BracewellFarm.com.)

Q: When you aren’t supporting PHA as a volunteer or managing the Farm, what do you like to do for “fun”?

A: Sometimes it seems like my favorite hobby is mowing or doing “weed patrol”, as I call it, around the farmyard!  Not really a hobby, but seems to take up a lot of my time during the summer to try to keep the place looking nice.  I enjoy spending time with friends, hanging out on the “sky deck” at the farm, reading, watching movies, researching genealogy and history, and walking.  We built a structure at the farm awhile back that started as a picnic shelter, but we added a deck on top.  It’s fairly high and might be considered more of an “observation deck”, but we have dubbed it the “Sky Deck”!   It’s a great place to hang out with friends or relax and enjoy the sunset! 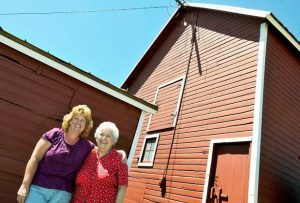 Interested in volunteering with the Poudre Heritage Alliance? Please contact Jordan Williams at programs@poudreheritage.org to learn how you can support the Cache la Poudre River National Heritage Area, or click here to sign up! During the month of November, we join the nation in celebrating Native American Heritage Month, recognizing the significant contributions the first Americans made to the establishment and growth of the United States. 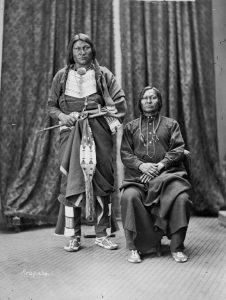 Crazy Bull and Chief Friday in Washington, D.C. in 1873. That year, a delegation of Northern Cheyenne and Arapaho from the Red Cloud Agency went to the capitol with their agent, Dr. John J. Saville, to discuss their hunting rights as well as their future home (Photo by Alexander Gardner, 1873)

Indigenous peoples have been living in and migrating through the unique eco-tone of the Cache la Poudre River National Heritage Area for more than 13,000 years. As Brenda Martin, Curator for the Fort Collins Museum of Discovery writes, “Tribal groups as we know them today are not recognized as being present until 1,000 A.D., if not longer, beginning with the Numic (Uto-Aztecan) speakers, commonly known as the Ute. Oral tradition and the ethno-historic record show evidence of other tribal groups like the Apache, Comanche, Arapaho, Cheyenne, Kiowa, Lakota, Shoshone, and Pawnee in Colorado as early as the mid-17th century.”

In the early 1800s, after the Louisiana Purchase, Euroamericans begin exploring the Plains. In the 1850s, the federal policy of westward expansion brought many more people to the area of the country we now call Northern Colorado. This policy promoted agriculture, mining, and trade. Thus began a painful history for the Native American tribes that have called this area home for so many hundreds of years.

Martin writes, “In 1868, the last of the Native Americans, Friday and his band of Arapahos, were removed to Wyoming, with the Federal government mandating by 1878 the removal of all Native people to designated reservations. Except for the Southern Ute Indian Tribe and the Ute Mountain Ute Tribe, all others were located outside of Colorado. Combined with other assimilation policies, conversion to Christianity, restriction to boarding schools, and the outlawing of most Native American ceremonies, there was a tremendous loss of cultural knowledge and traditions.”

In their own words, Northern Arapaho elders shared the importance of the Poudre River to their tribe’s history and culture on this video series produced by the Poudre Heritage Alliance:

This month, we look forward to sharing some of the many stories of Native American peoples and celebrating their unique cultures and traditions. We hope you will join us in learning more about the indigenous tribes of the Cache la Poudre River National Heritage Area and sharing in the celebration of our Nation’s First Peoples.